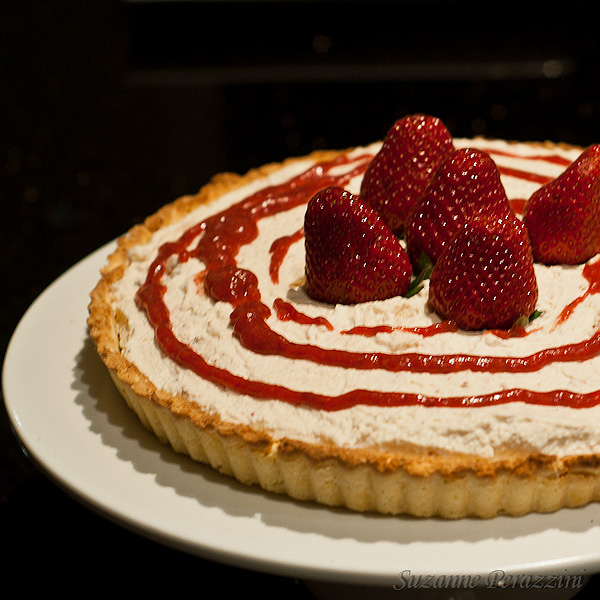 Last night, we had very good friends over for dinner. They happen to be the parents of Dario’s girlfriend, Alex. You see, we met at anti-natal classes so Dario and Alex have known each other since the womb. They played together as children but then we moved to the other end of Auckland and our get-togethers got less frequent until there was a period of two years between the ages of 14 and 16 when they didn’t see each other. Then they did and a mini-explosion happened and they really saw each other – not as two childhood friends but as a male and a female. They are now 22 years old and it’s still going strong.

Anyway, Stephen and Genevieve came for dinner last night and I love cooking for them because they are so appreciative of my efforts. They are good enough friends that I can experiment on them and that’s what I did.

We started the evening with small tarts made with puff pastry and three layers of flavours. The first layer was peas, salmon, ricotta and lemon whizzed together in my Cuisinart Mini Processor, then I added a little feta cheese crumbled on top and a small slice of tomato. We ate them while drinking two bottles of French champagne. The tarts disappeared pretty quickly as did the champagne.

Then we had home-made tortellini but I forgot to take any photos of them and they were so pretty too.

Next came the piece de résistance – a deconstructed Thai chicken burger. Now I don’t really go for deconstructed food and this was not my intention when I created this dish, but once it was assembled, I saw that I had done exactly that – deconstructed a hamburger.

I cooked polenta and cut out beautiful thick circles.

Then I made chicken patties stuffed full of lots of Thai flavours – coriander, chillies, ginger, lemon grass, soya sauce and cut them to the same size as the polenta.

I bought some massive tomatoes and cut slices which I baked and placed on top. Burgers need a sauce but tomato sauce wouldn’t cut it with Thai flavoured burger so I ground up some cashew nuts, coconut, lemon, mint and loosened it with coconut milk. I spooned this on top of the tomato and served it all with a little green salad. Please excuse the photo. These were taken very quickly because it is one thing to keep the family waiting before they can eat but it’s not on with friends.

Then came the biggest experiment – the dessert. I wanted to make it gluten and sugar-free so I found a tart base recipe made with coconut flour and used that though I did add some tapioca flour to bind it well.

Then I used the middle layer of these slices and topped it with whipped cream mixed with strawberry and date puree. The base was a little tough but held together well and the rest tasted good. I dribbled some of the strawberry/date puree on the cream as decoration but it came out rather random and once it was on the cream, there wasn’t much I could do about it so this is not the best decorated tart.