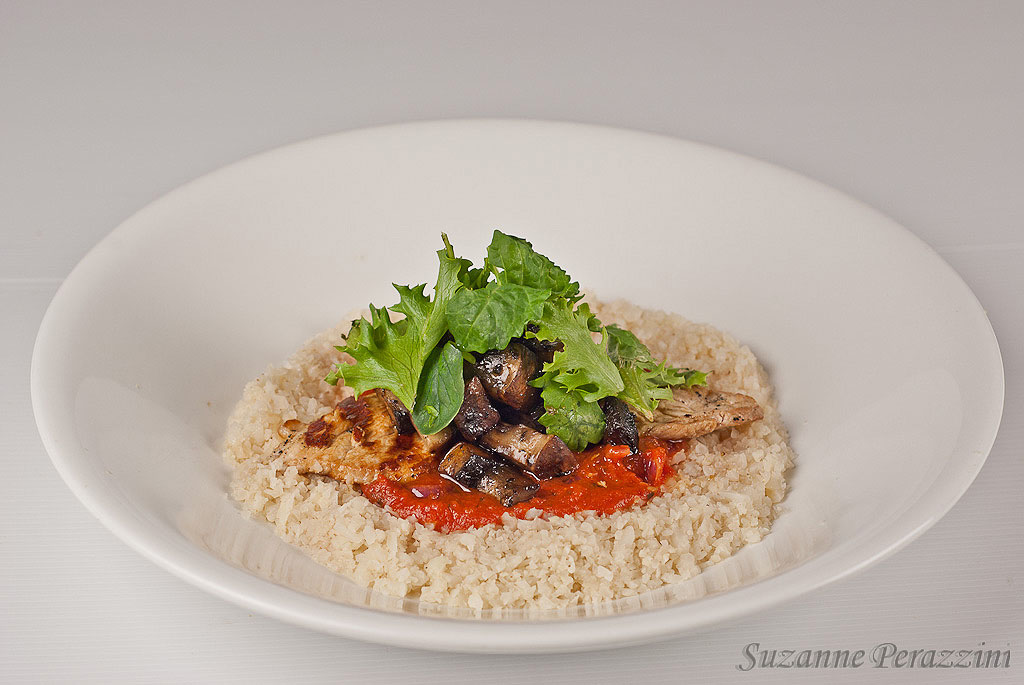 I’ve spent the day cooking up a storm for the e-cookbook – marshmallows, chocolate truffles, pineapple cake, caramel slice and jam cookies. I also made meringues and, for some foolish reason, thought I would change the recipe from the one I used on the lemon meringue tarts and they tasted terrible – like cardboard. So they all ended up in the bin. Some things can be redeemed with some coconut cream or chocolate ganache but these were inedible. Anyway, five out of six ain’t bad. Then friends turned up with their teenage son who proceeded to demolish half of my baking, making suitable squeals of delight so I guess that meant he approved of my sugar and grain-free offerings.
Last night, Adriano travelled to the middle of the island for a mountain biking race and I cooked a simple dinner for Dario and myself. Riced cauliflower is a great way to replace the grain as a base to soak up a sauce. On top of the cauliflower I layered a homemade tomato sauce, vegetables and pork fillets. I got this idea from the Petite Kitchen blog but made my own version.
This afternoon, Adriano came home clutching his ribs. He had had another close encounter – this time with his own bike. Going too fast down a hill, he and the bike catapulted head over heels and the bike won. I guess he won’t be sleeping too well tonight since even breathing hurts. At least he won’t be bleeding all over the sheets for a change. It’s usually hunks of skin that are missing when he comes home.

Update on my food journey: the weight is gradually dropping despite eating my own baking whenever I want. And my blood sugar levels are great. There are still some digestive issues which I am working on. It is indeed a complex puzzle to unravel.