Any regular visitors to my blog will know by now that if you have irritable bowel syndrome, then you will probably be helped by the low Fodmap diet. One way to test if you mal-absorb Fodmaps is to do a hydrogen breath test. In this video, I have explained what happens during the test and what they are testing for. The transcript of the video is below the recipe if you prefer to read about the test.

Transcript of the Video

Welcome to this video. Today, I’m going to talk about the Hydrogen Breath Test, which can test whether you have an intolerance to a couple of the FODMAPs, not all of them, but it will test for fructose and for lactose, and, in some places, it can also test for polyols or some of the polyols. I had it done in New Zealand, my home country, and that was not the case. They just test for fructose and lactose here.

How does the hydrogen breath test work?

It’s done over 3 days, and you have to stay there round about 3 hours for each of the days. So you have to set aside quite a space of time, and it’s not cheap either. Here in New Zealand it was $300 or $400, something like that.

On the first day, they test you with lactulose. So they’re just testing your levels of hydrogen or methane, which is what you breathe out from the digestion of foods. And I think it’s about a third of the population breath out methane, and I’m one of those, and the rest breath out hydrogen from the process of digestion. So they want to see what a baseline is for you, because lactulose is not something that you would react from. It wouldn’t cause the fermentation that FODMAPs can create.

So, they test that first, and then you go back for a second time and for me they tested fructose next. They give you a drink, quite a big drink, a very, very sweet drink of fructose, and then they test your breath every 15 minutes to see what the levels of, in my case, methane are, because if you’re not managing to absorb the fructose in the small intestine, then it’s going down into the large intestine where it starts to ferment. And those gases that are created down there are absorbed into the system and you actually breathe them out reasonably quickly, and that would mean that your levels of methane or hydrogen would go up. And in my case, they went up quite considerably, and they kept testing me for the whole 3 hours and I was pretty sick during that time because I was not really absorbing the fructose at all.

And then I went back the next time, but they leave a gap of about a week in between, so that you can completely settle your system again. They do give you a diet for, I think it’s just the day before, to make sure that, in the second case, that you don’t have any lactose in your system when you go for the test. So I went to the second test feeling very worried about it because of my experience from the first test, although I was fairly sure that I actually didn’t have an intolerance to lactose. You kind of know some of these things and I’d always been able to drink milk and not have anything terrible immediately happen. Anyway, so they gave me a big glass of the lactose, it’s not milk, but lactose. It was a clear liquid. And then they do the same thing, they test you every 15 minutes to see what your hydrogen or methane levels are. In my case, nothing happened really. I felt fine the whole way through for the 3 hours, but they kept me there for 3 hours. Sometimes they don’t need you that long.

And then, in my case, because I was a methane breather, they had to send that away to get analyzed at another lab. If it was hydrogen, they would’ve done it right there and then and would’ve given you the results, but I had to wait a couple of weeks. But by then, I knew anyway, I was mal-absorbing fructose, but not lactose. Anyway, so that’s what the hydrogen breath test is. And, as I said, it’s fairly expensive, so if you don’t want to do it that way, you can just do the elimination diet instead, because you have to do that anyway to see if you’re malabsorbing the other FODMAP’s like fructan and the other polyols and the galacto-oligosaccharides, which are the legumes. So you might as well do the elimination diet anyway.

And if you have any intolerance to any of those FODMAP’s, then the FODMAP diet is for you, but you can tailor it to suit yourself. Thank you very much for listening to this video and please, if you have IBS, the low-FODMAP diet is the very best solution for you. Goodbye. 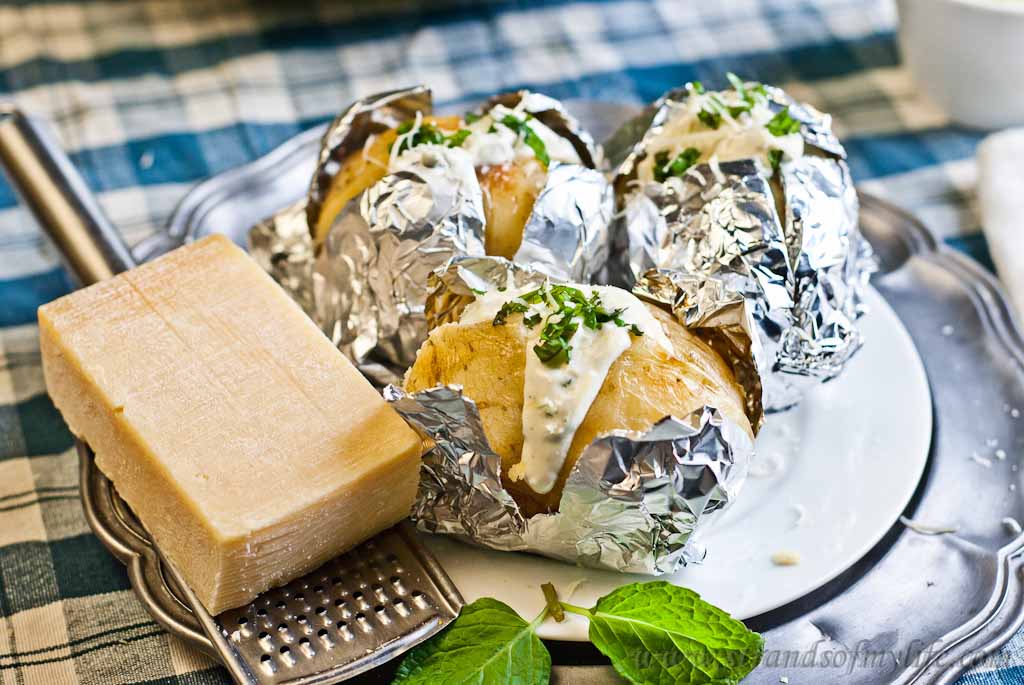 Today's recipe is a simple one - baked potatoes. I haven't had a simple baked potato for ages and yet I eat plenty of potatoes because they are low Fodmap and a good source of instant energy. I will be exploring a few different ways to prepare potatoes over the next few weeks and I thought the baked potato was a good one to start with because it is simple to prepare and delicious to eat. Do be careful with handling them when they are straight out of the oven because they get very hot.