This is the second of the recipes I’m making from that vegan cooking book. It’s a vegetable paella and I chose it because it brings back memories of a wild holiday Adriano and I took through Spain some years ago. I say wild not because we partied like teenagers but because we thought Adriano’s bright green Renault bomb of a car could get us all the way from Italy, through France, right around Spain and back home again in one piece. It didn’t happen as smoothly as we had imagined. The car betrayed us several times and then we were robbed in a camping ground just outside Madrid so we gave up and limped home.

That makes it seem like a miserable holiday and it was anything but. As we cruised down the eastern coast of Spain through the steaming heat in a car without air conditioning, we would stop for lunch at any appropriately cheap-looking, non-touristy eating hole and order paella and the local wine. Laden down like beasts of burden with bellies double the size and a slightly foggy outlook on life, we would fall back into the sauna of a car with great plans to drive another 500 kilometres. Soon we would be discussing the possibility of cutting the travelling short just for today and we would veer into the closest camping ground that was situated near water. The one last jot of discipline left in us forced us to erect the tent before we would stumble, steam rising from our poor overheated, overfed bodies, straight for the water, be it the sea, swimming pool or fish pond and sit in it.

This invariably happened every day and we became well-acquainted with the local variations of paella and wine all round the eastern and central part of Spain. So you could say I am a connoisseur of sorts of paella and am the perfect critic for this vegetable variety.

This was a pretty tasty dish but not like the paellas I remember from Spain. Sure, it was a rice dish with saffron and paprika like paella but it didn’t have the flavours or crispness I remember. But then again, I don’t have a paella pan to get that really yummy crust at the bottom. One thing I did love though was how simple this recipe is. Very little preparation and then it cooks itself. So I would say it was worth trying.

Once again, this recipe comes from 350 Best Vegan Recipes by Deb Roussou and can be bought on Amazon. 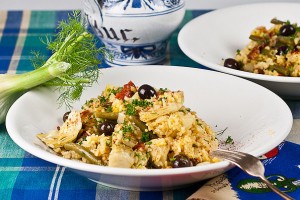 Disclaimer: I have received this cooking book free in order for me to do this review but the opinions are mine and mine alone.